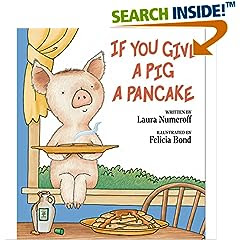 Those of you who have played the arcade game "Daytona" will remember the announcer making this statement prior to the game starting.

I felt as if I was walking back into the "battleground" of hyperactive children clamouring for attention and to be fed the ultimate antidote to the illness of "boredom"!

Yes, kidsREAD! starts again at Jurong Student Service Centre and I found myself leading the neighbouring class as some of the regular volunteers were not available. HM felt that as my regular class was slightly less hyperactive than this bunch, she suggested that I take on this challenge. This class had about the same number as my class except they were more active in some aspects. After surviving 9 months of the program, I was more prepared and led them through the book, "If you Give A Pig a Pancake" by Laura Numeroff and illustrated by Felicia Bond.

I chose this book partly because during one of the National Library Board's training sessions for kidsREAD! volunteers, the trainer had used this book to illustrate the techniques for reading to children. As most of the children had read the other books, I decided to use this one as I could still recall some of the elements of the story.

I gathered the children in front with their chairs facing me in a loose type of semi-circle and launched into the story-reading session. This is one of the recommended books in the kidsREAD program and I can see why. The illustrations of the cute pig and the adventures she goes through with her owner are attractive and easy to follow. How I do the story reading is to start off by asking the children - who likes pancakes or even knows what is a pancake. This gets the children interested about finding out more of the relationship between the pancake and the pig.

The book leds the readers along a journey on each step, i.e. if you give a pig a pancake, she will want syrup to go with it. That leads to the syrup - which is sticky - leading to the pig asking for a bath...and so on and so forth. It teaches the children to follow a certain sequence of events and at the same time helps them remember sequence of the facts. Of course, being a children's book, the illustrations make it fun to follow and I use the pictures to ask the children - do you see the syrup ? Who has tasted syrup before?

I learnt from my kidsREAD experience that story reading has to be interactive to children as reading to them like a newsreporter will result in a very fidgety and bored audience. By asking them questions, asking them to point out objects in the pictures and asking them to repeat certain words and phrases, they become more interested in the story and start to use their listening skills, speaking (repeating words and phrases). Also, allowances can be made for the children to interrupt as some will want to share their experience e.g. "Teacher, I have eaten pancakes at McDonalds before."

Most of the children responded well to this book and I concluded the session after spending about twenty five minutes on the book. After that, we broke up into smaller groups as there were two new potential volunteers who were helping. Thanks for your help! We played some word games with the children such as "Hangman" and "Guess the murderer" (though I am not sure how that game is played as the other volunteer was leading his group).

Pretty soon, the one hour for kidsREAD was completed and the children quickly packed up to go home. Another good session of kidsREAD where I practiced my story reading skills. Onward to next week's session on the 8th July 2006!
at 5:08 PM