The penultimate event in the Chinese Development Assistance Council (CDAC) Jurong Student Service Centre's kidsREAD programme was the SMRT Read-N-Ride Storytelling Train that was jointly organised by the SMRT, National Library Board and supported by the various kidsREAD centres all over Singapore.

17 of the children plus volunteers from Jurong Junior College as well as the regular kidsREAD volunteers came together early in the morning at 8.00 am for the bus that would take us on this story-telling journey on an express MRT train. Hogswarts Express this was not but the experience was similarly magical!

I was made the "In-Charge" and I promptly employed the skills taught to be in my reservist to empower (aka delegate) the volunteers to take care of 4-5 children among 2-3 volunteers. Our ratio of volunteers-to-children was adequate for command and control and off we went with 2 parents and an elder brother of one of the participants in tow.

The children were reasonably enthusiastic at the start of the program, but as we had arrived early at the staging area - Jurong East MRT station and had to wait for the other groups to arrive as ALL were taking the same train.

In the harsh rays of the morning sun, the children inevitable asked, "Why must wait? Who are we waiting for," as they fidgeted and sighed for the journey to begin.

Before long, most of the other groups had arrived and we did something we had never done before. Gettig a free ride on the mrt station without tapping the farecard! :-) The SMRT staff facilitated our entry through a permanently open fare-gate and we got up onto the plaform level and waited for the "KidsREAD Express".

Unlike the Hogswart Express, the KidsREAD express was a regular MRT carriage and did not sprout any smoke as it did not have any chimney and run on electricity. We were ushered into the train and the children were arranged to sit with Woodlands kidsREAD children and the magic began.

Roving teams of story tellers from the NLB and SMRT staff took turns to do story reading as well as enacting some of the stories being read to the children. The acoustics for the MRT train was abysmal. As a result, portable microphone and speakers were issued to the story-tellers to overcome the loud background noise that is common on the subway. Most of the children were engrossed in the stories because there was nowhere to go but also due to the novelty of the experience.

The express nature of the train took us from Jurong East to Expo in less than 45 minutes as we did not stop anywhere for anyone. Before the 3rd story could begin, we had arrived at the Changi Expo.

We disembarked from the train and trooped to the Asian Children's Festival that was happening. The organisers had arranged for the children to have their lunch, view the performances which included story telling as well as Sudanese Silat. The children also tried the heritage games and asian costumes that were available at the Asian Children's Festival.

Time flies when you are chaperoning 17 children and it was a relief that we were able to account for all the children and volunteers at the end of the program. The same bus that took us to Jurong East MRT fetched us back from the Expo to Jurong SSC.

It was an enjoyable experience as I managed to capture (in a MTV-jerky style) on video on my Treo 650 most of the performances by the two story tellers as well as photos of the event which I have uploaded via flickr!

Next week, kidsREAD graduation and the end of the program and I'll have to say goodbye to some of the children that I have grown fond of. Some of the children who joined us half-way will get to carry on another year with us but I will see new children in the kidsREAD class next year.
at 11:38 AM No comments: 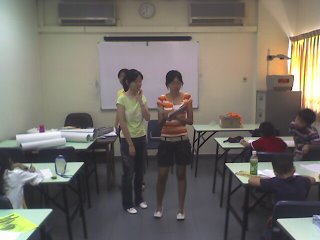 This character development workshop was organised by YQ and two of her friends who came down to help out with a combined two hour session for the classes for the older children.

They started with the reading of two stories, interspersed with doing worksheets with questions based on the story given in the books. The questions were fairly straightforward for the children but some were unable to answer them because they were not concentrating on the books. It was a larger class and given the classroom sitting arrangement, some of the children who sat further away from the volunteer who was reading to them had some problems following the story.

YQ and friends spent time preparing and selecting the two stories as well as drawing out large pictures from the stories on vanguard sheets to help the children visualise the scenes in the story books. It is gratifying to see young people being so enthusiastic about helping the children in the kidsREAD programme without any tangible reward! This is what I call passion! :-)

There were also some role playing given to the children to act out circumstances about helping a friend and so on. Some rabbit brand milk candy plus ferraro roche chocolates were given to those who participated. The children also completed the worksheet which had some english questions e.g. good ______ best, beautiful ______, _______.

Jigsaw puzzles were the last activity for the children as they were challenged to work cooperatively to help complete a picture of a teddy bear and scene of a house.

I think the children emjoyed the session though I believe the story reading was a tad too fast for some of the children to follow. I applaud the spirit and enthusiasm of YQ and friends and encouarged them to come down to help out at kidsREAD more often. :-)

The Peacock and the Coucal

The children have all finished their examinations and we see more of the children back at kidsREAD this session. Six (YX, R, YZ, J, LM, C) of them turned up made up of three boys and three girls matched equally of 1 male and 1 female volunteer (myself and K).

I continued with the Judy Ling series of big books and today I did a story with the children on a Peacock who mocked the Coucal. It turns out from Wikipedia that the Coucal is a type of cuckoo bird and it was interesting that all the children thought the peacock was a male bird! Perhaps due to the fact that with all its beautiful tail feathers, the children associated the peacock with female characteristics i.e. beauty = female.

The children said that liked the story after I had gone through it with them. This book teaches us about not being proud just because we have some talent/attribute such as beauty. In the book, the peacock mocked the coucal and made him feel small because the coucal had the colour of mud, tree trunk and the forest floor - brown while the peacock's tail feathers were as beautfiul as the rainbow. However, the peacock gets him comeuppance when a hunter shoots the peacock's tail feathers while the Coucal survived because he was able to camouflage himself and blend in with the forest without being spotted.

After learning the moral of the peacock story, we divided into two groups with K taking the girls when I led the boys in group reading. The boys were back to their boisterous and active ways moving from chair to table and back to the chair during the group reading. I sometimes get tired just looking at them..haha.. R has musical inclinations as he sang out the book "Joseph and the Jacket".

Next week we will be having a character development workshop led by one of the enthusiastic volunteers (YQ). Can get to take a break from our reading and do something different for a change.
at 11:07 PM No comments: