Mama Do You Love Me? 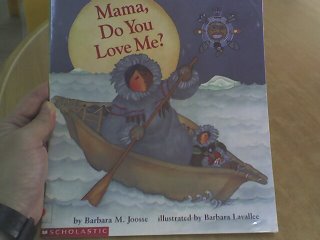 Today I had C to help me with the class which has now grown bigger.

The book that I chose today was "Mama Do You Love Me?" by Barbara M. Joose and illustrated by Barbara Lavallee. The more I get into the kidsREAD program and read more children's books to my class, the more I realise that illustrations play a very important role in children's reading. While adults can read a novel consisting entirely of words, words and more words, young children need to have some visual stimulation through pictures, graphics and illustrations to help give them visual cues in which to build their imaginations.

The same goes for blogging to some extent. Blogs on serious issues that are persistently non-political require the exercise of the little grey cells we have in abundance in our head. However, the blogs that literally catches our eyes more are the ones that have pictures or images that capture our attention. Human beings are for the most part visual creatures and we react to visual cues the fastest.

This books tells the reader about how much an Inuit mother's love for her daughter transcends all the naughty things the daughter can think of doing e.g. dropping eggs on the floor, messing up her mother's clothes etc. The setting is based on Inuit (aka eskimoes/natives of Alaska, Artic region) culture where they touch on ptarmingans (a type of small artic fowl), walruses, whales, musk-ox and the like. Good illustrations but the book is not very big so the group has to be relatively close to be able to see the illustrations clearly.

I think most of them enjoyed this book which has a simple message, i.e. 妈妈的爱是最伟大的！(mother's love is the greatest!) in a non-patronising way to the children.

After reading the book to the children, I moved on to playing some simple logic games by asking them to match the animal in the book to a phrase e.g. a puffin - eats fish, a wolf - howls at the moon. We then spent the remaining 25 minutes asking the children to draw their favourite animals that were found in the book.

Will post up some of their pictures up here once I get them scanned in.

Overall, another reasonable class though I need to ramp up my preparation for the classes more and make use of the kidsREAD volunteers' reading guide and select one of books from the guide.

Next week, I will break up into smaller groups for group reading as I have been doing a number of story-reading sessions with them. Some of the children are itching to be able to read and I think I need to spend more time on the students who are not reading as well as their peers.
at 11:04 AM

Labels: artic, Eskimoes, Mama Do You Love Me