Mr Li and his Teapots 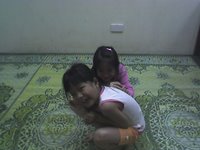 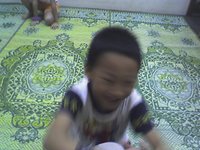 We changed our older class of kidsREAD to Sunday as the Jurong Student Service Centre (SSC) was celebrating its tenth year anniversary Mr. Lim Boon Heng, Minister (PMO) and MP for Jurong GRC was the Guest-of-Honour for this event.

As some of the children could not make it for the Sunday class, we had a combined class of both IIA and IIB. I was fortunate that YJ and K were also present to help with the class. We had selected a few of Judy Ling's large picture books on "Mr Li and His Teapots" as well as a couple of others. As the Minister would be dropping by, we timed our session for the children about the time he went on his tour of the Jurong SSC activities and classrooms. He popped in when I was about two-thirds into the book with the children. I think he "stayed" for a total of 1 minute :-)

Before that, to prevent boredom from settling into the children, we played games like Simon says, hunter/squirrel/tree to get them warmed up. The children enjoyed it immensely and I believe they were more than warmed up.... Hyper is the word I would use. :-)

Here are some shots of the cute children of kidsREAD.
at 11:28 AM